Life in Pieces of Why? 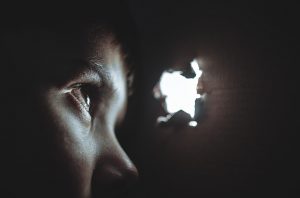 I know the pain they were feeling, When I hear someone committed suicide, I feel what I felt when, for a few minutes one night, suicide became very real for me. I feel the loss of control they are feeling, I feel the sadness they have lived with for longer than most can imagine. It’s a sadness that few will ever truly understand. I feel the forced smiles and the times that interacting with others took every bit of energy they had. Every second spent hoping that the overwhelming sadness was not seen. I feel the feeling of never being good enough no matter how good they were to the world.

As I think about what the person was feeling, my breathing becomes difficult, I feel as though I cannot get enough air, I feel as though I am suffocating, I feel what I am sure the person felt as they took the pills or placed the belt around their neck knowing in a very short period of time it would all be over.

Money, fame, success. None of these change the internal dialog. Family, friends, jobs cannot forever silence the voices that go on inside the head of a person who is struggling, To the outside observer, we are deemed to “have everything” and it is inconceivable why we would do this. Those who seems so perfect on the outside are often struggling even harder on the inside.

Often, those who grasp for money, fame, and success the most are fighting the biggest demons inside. Yes, they are demons. Demons who come at any time of day and night and we have to fight to silence them, We grasp at anything that we can and the harder we can grasp that “other thing” the more likely the demons will go quit. At least for a while.

What do the demons say? They say we are not worthy, we are not ever going to be as good as we want to be, we are stupid, we are ugly, we are lazy. I could go on and on. Just know, these demons break us down every day. Sometimes once per day. Sometimes once every hour. We fight back. We try to stay active, we try to smile, we try to go to work. We try to focus on positive things and hope that eventually we will control the demons and in turn control our thoughts and feelings. Some do.

Well, maybe it actually reaches a point where we have had enough. Putting on a show every single day of ones life. Always wearing a mask. Always putting on a mask for those we see each day. Taking off that mask behind closed doors and fighting the demons when they come.

Some take medication. Back and forth to this doctor and psychiatrist and therapist. This medication works but it makes you sick. Another medication and now you are running from a killer every night in your dreams.

Every single night, running for your life. Wake up from the dream and then go back to sleep. The dream picks up right where it left off. You just put it on pause by waking up. Now, the little sleep you were getting is nonexistent.

Back to the professional again. Another medication and now, the headaches are so excruciating you believe your head is going to explode. Is the anxiety, depression, suicidal thoughts better? Who the hell knows but your focus is definitely in a different place for a while. Then, a medication works. At least for a while.

Next, the taboo of being on these types of medication starts to set in. The thoughts of will this be for the rest of my life. All of the “what ifs” start. This is how it might happen for the lucky ones who actually find a medication that truly does work. Most find a medication that helps but does not eliminate the demons and it causes side effects that are as bad or worse than the original problem.

Some people start this journey in childhood and continue to adulthood. Some start the journey and finally just stop because it does not help. Some do get a lot better but once clinically depressed, it will always be there, waiting for any mental or biological shift and it will resurface. Perhaps, it does not resurface in full force but it is there and you can feel it when the demons start lurking. They never stop lurking.

Always scared of tonight, tomorrow, next week. Always hoping that the next job, hobby, endeavor will drown the demons forever. It never does.

How can we ask “why” if we consider the pain that has occurred in our own lives and multiply that by 10,000.

How can we ask “why” when we know the complexities of our own lives and we know how painful some things are and we know that most of us don’t every really “just get over it.” We suppress and one day, the right stimulus brings it back the surface. We lash out at others, we cry in the car on the way home, we crawl into bed at 2pm instead of 1am. Some drink or do drugs to numb the pain. Some take sleeping pills every single night to turn it off. We all cope in our own way. Everyone is coping in some way.

The difference is, when one commits suicide the ability to cope is gone. The ability to cope and fight the demons for control is no longer possible. We take the pills or place the belt around our necks because the struggle is just too much for us. We can no longer live a life that we never feel belongs to us. We grow tired, a tired that few will ever understand. Tired in a way that grasps our strength to fight like the suction on a vacuum. Sometimes it takes years for it to get the right grasp but once it does, it won’t let go.

What you see on our face as a smile, what you believe is joy and happiness and success is a mask that we wear to try and convince the world and more importantly ourselves that we are in control. We know we are not. We control nothing.

I know what it feels like to reach the point where fighting the demons has taken every bit of my will to live. I pulled the suction hose as hard as i could for as long as I could but eventually, I had no strength left to keep fighting. The demons had to be right and I took the pills to because I had not strength left to fight. For the first time in a long time, I laid down, knowing that I would finally get peace from the demons.

When I hear that someone committed suicide, I spend several days feeling the feelings that I know they felt the moment they made the decision to end it. I know how much time they have spent thinking about how much better off those closest to them will be. I know how many times they have come so close to committing suicide and they made the decision to push harder to keep living. I know this is the last thing they wanted to do. I know committing suicide means the demons sucked the last bit of life from the person and those god damn demons, that came without an invitation, they won.